Britain's biggest and most inspiring festival of entrepreneurship 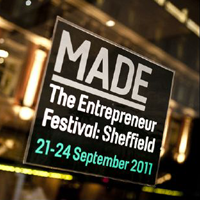 As September fast approaches, it's almost time again for the biggest entrepreneurs event of the year; MADE Entrepreneurs Festival. If you haven't been before, it's a pretty phenomenal event which sees the country's most successful business leaders, incredible inventors and magnificent makers gathering together.
The festival is now in it's third year, and will once again be taking place in Sheffield between the 19th-21st September. MADE has become a signature part of the UK's enterprise calendar and is a showcase of brilliant British talent.

Here's what some of the high profile guests have said:

"If you're not at MADE, you're never going to be made. You need to be there." - Dragons' Den star Peter Jones CBE

"MADE is a major national festival that the whole of the UK can be proud of." - Deputy Prime Minister Rt Hon Nick Clegg MP

"It's a great opportunity for entrepreneurs from all over the country to share their ideas and inspire the next generation of business owners." - Mail on Sunday

"I thought it was such an exciting event and so positive that I wanted to come back again. There is real energy here." - Business Secretary, Rt Hon Dr Vince Cable MP

Tickets are reported to be moving fast, so we would advise that you get your's early to guarantee your place.

MADE will be host to a pretty spectacular line up of speakers including: