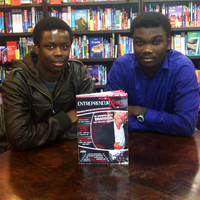 Created by two students from London, EntrepreneurXpress magazine is the first student led entrepreneurial magazine for young people in the UK.
Their idea stems from a desire to help the current and future generation of young entrepreneurs, as well as engaging those who have a previously undiscovered interest in entrepreneurship. Through empowering the business leaders of tomorrow their aim, above all, is to demonstrate that entrepreneurial success is a realistic goal for all who are passionate and hardworking enough to strive for it.

EntrepreneurXpress are the first UK magazine aimed solely towards inspiring and helping young people to get involved with entrepreneurship. Founders Albert Acheampong-Berchie and Timothy Armoo told us that the magazine is principled on three I's: To Inform, Inspire, and Involve, with each bringing us a step closer towards our vision of making youth entrepreneurship the norm and not the exception. In the current economic climate, entrepreneurship is an increasingly popular choice, and EntrepreneurXpress believe that being young is the best time to start a business as you have the opportunity to fail and try again. The magazine strives to provide the engine for young people in the form of inspiration, information and practical involvement in the world of entrepreneurship through the likes of their interviews, articles and competitions.

The magazine primarily aims to be an aid for Sixth-Form and University level students, with the typical reader being one who is considering starting or has already started a business and is aged between 17 and 22. The magazine's first edition is set to launch in September 2012 and will be distributed to over 20 schools and universities across the country. At present 2 editions of the magazine will be distributed in each of the 3 school/ university academic terms and anticipate circulation levels upwards of 20,000 per edition by the end of the academic year.

The magazine has already plenty of positive media interest, having been featured in Southwark News and additionally highlighted on BBC Radio Nottingham. They have also obtained exclusive interviews with leading entrepreneurs including the likes of Richard Branson. EntrepreneurXpress are set to cover the 2012 Young Entrepreneurs Festival as official media partners, in addition to Entrepreneur 2012 later this year.

If you would like to find out more about the magazine, or find out how to get a copy you can visit their website at www.entrepreneur-xpress.com